The Mohamed bin Zayed Species Conservation Fund has awarded 778 grants for this species type, constituting a total donation of $8,012,693.

Why to go and how to live in mangroves: the Yellow-breasted capuchin monkey study case

The objective of this project is to assess, monitor and model the population dynamics of the current Black rhino population in Majete Wildlife Reserve and to determine the carrying capacity of the reserve for the species prior to further re-introductions. This will include determining territory and home range establishment, calving rates, distances travelled to find suitable browsing, and the overall health of the founder population

Human-orangutan conflict is a serious and growing threat to this critically endangered species. As farmlands encroach into forest areas, orangutans become trapped and isolated, often resorting to crop-raiding for survival. This project evacuates orangutans in danger, returning them to safe forests, works with farmers to reduce and avoid the causes of conflict, and supports law enforcement for the protection of orangutans and their forests.

The Tamaraw, a dwarf buffalo endemic to the Philippine island of Mindoro, is now restricted to few isolated mountainous spots. Survival options for this critically endangered species are limited due to increasing human pressures. The project shall collect field-based data on current distribution range and threats. It aims at implementing consistent solutions to protect the Tamaraw in the long term.

The Somkhanda Community Conservation Project works to ensure the continued success of rhinoceros conservation efforts in the tribally-owned Somkhanda Game Reserve by training local rhino monitors and conservation educators, and employing them to work in the reserve and its surrounding communities. Educators teach about the deleterious effects of poaching, and generate support for biodiversity conservation that can provide long term benefits to ...

The project will observe behaviour of Ateles fusciceps rufiventris living in connected forest and will compare with Ateles geoffroyi azuerensis's data previously collected in fragmented habitat. We will obtain group structure and population dynamic data by direct observations and camera traps located at canopy. Variables resultants will lead futures plan of management for monkeys living in fragmented forest.

Conservation education is seen as a priority long-term action for the conservation of chimpanzees and wildlife. Nature clubs can play a vital role in changing attitudes towards the intrinsic value of wildlife. The WCF created nature clubs called Club P.A.N. in schools around Tai National Park / Côte d’Ivoire and schools in Boké / Guinea as a long-term conservation approach oriented towards the next generation.

This project deals with identification of hotspots of human-leopard conflicts, better understanding of underlying causes and description of conflict patterns in Golestan National Park of north-eastern Iran. Harbouring 23-42 individuals and covering an area of 874 km2, this park has been a major habitat for the globally endangered Persian leopard in the entire Middle East.

Assessment of conflict between Human and Critically Endangered Asiatic black bear, in its westernmost global extent is the main objective of this project. Extensive field survey, scat analysis, local communities interviewing and workshops holding in high conflict areas, are among planned activities to identify the type and the size of the conflicts and finding local solutions due to reduction of Human-bear conflict. 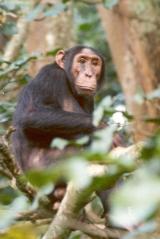 Project work focuses on the loss of particular tree species in Budongo Forest Reserve, Uganda, as a result of anthropogenic activities. By identifying those trees which are being steadily lost from the forest but which provide essential nutrients to the chimpanzees and other primates in the forest, we aim to promote their conservation, mainly by increasing awareness in local communities.