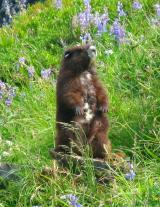 We identified the boundaries for management units for four key species in the Argentine Sea affected by human activities (mortality in fisheries, unregulated tourism and oil and gas exploration at sea): CommersonÂ´s dolphin, dusky dolphin, South American fur seal and South American sea lion. The Southwestern Atlantic has been one of the most impacted marine environments in the last two decades by fisheries.

The diversity and richness along the altitudinal gradient change depending of the heterogeneity of the habitat. I research the relation of the environmental factors and distribution of the species in seven localities along the gradient of Pampa Hermosa River, JunÃ­n, Peru. I report 34 species, the redicovery of Marmosops juninensis and the range extended of Monodelphis gardneri. Also, I found corelation with their habitat.

The result obtained by the population survey in the 7 sites estimated occurance in range of the 10-15 individuals. The survey results recommended two potential sites which have good habitat and carrying capacity for the release of Javan slow loris and Calobak, Tapos. Awareness public activities to find solutions to prevent the decline in current population of Java slow loris with law enforcement activities.

Our study examines gastrointestinal parasitic infection in a population of endangered Sanje mangabeys in the Udzungwa Scarp Forest Reserve, Tanzania. Through primate censuses and fecal collection, we document infection prevalence in relation to human encroachment and habitat destruction. As there are fewer than 1000 individuals left in this population, assessing the risk of disease infection is a necessary step for effective conservation.