The aim of the Nigerian Montane Forest Project is to : combine scientific research with education at both tertiary and local community level in order to develop long term sustainable management of Nigeriaâ€™s montane forests. We achieve this through the running of an ecological research station which attracts national and international researchers and is run largely through the local community.

This project is studying how forest loss influences micro bat species composition and habitat use in timber production areas on the island of Tasmania, Australia. We are focusing on the Tasmanian long-eared bat, which is endemic to the island but of which little is known.

We have had a three year project to survey the biodiversity of the the region south of Kisangani and between the three rivers :Tshuapa-Lomami-Lualaba in the Democratic Republic of Congo, Africa. Subsequent to our discovery of important populations of bonobo (Pan paniscus) that were being hunted, we have worked to control hunting and create a protected area. This project supports this effort.

This project aims to gather information on dugongs and their habitat in North Madagascar and Comoros and compile National Dugong Conservation Action Plans. 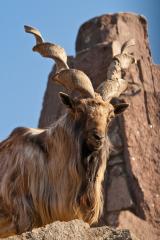 The goal of this project is to conserve the endangered flare-horned markhor, as well as other threatened wildlife (including Ladakh urial, snow leopard, and Asiatic black bear) in the Diamer and Gilgit Districts of northern Pakistan through surveys, hiring and training of local rangers, establishing community monitoring programs, and building capacity to better manage wildlife and resources in this region.