Razan Khalifa Al Mubarak is the founding Managing Director of the Mohamed Bin Zayed Species Conservation Fund (MBZ Fund) – one of the world’s most important foundations supporting direct species conservation. Since its inception in 2009 the MBZ Fund has supported thousands of projects in more than 150 different countries benefitting more than 1,300 different species and subspecies across all taxa. Through this work, and thanks to its many grant recipients, numerous species have been rediscovered and many have been pulled back from the brink of extinction.

H.E. Razan Khalifa Al Mubarak’s career has focused on environmental conservation and protection, with government organizations and civil societies with a strong interest in species conservation.  She helped establish Emirates Nature in association with WWF (EN-WWF) in 2001 and is currently its Managing Director. Razan Khalifa Al Mubarak was promoted in 2019 from Secretary General to Managing Director and Board Member of the Environment Agency - Abu Dhabi (EAD) . EAD is a large 1,000+ employee government agency responsible for all environmental regulation, conservation and promotion of sustainable development in the emirate of Abu Dhabi, the country’s largest by far and includes the UAE’s capital city.

In 2021, at the World Conservation Congress in Marseille, Razan was elected President of IUCN. She will continue serving IUCN in this role until the next election in 2025.

Razan Khalfia Al Mubarak serves as an Advisory Board member of the Rockefeller Foundation Economic Council on Planetary Health, the Cambridge Conservation Initiative, and as a Board member of Panthera (a charity devoted to conserving 40 species of big cats and their habitats around the world).

In recognition of Razan's global role in the field of environment and conservation, in 2018 Razan Khalifa Al Mubarak was selected by the World Economic Forum as one of the top 100 young sector leaders who contribute to building a more sustainable future for humankind, and appointed as Young Global Leader of the Forum.

H.E. Razan Khalifa Al Mubarak, was born in Abu Dhabi in 1979, and is today married with a daughter, and harnesses every opportunity to enjoy the natural heritage of the world with her family. 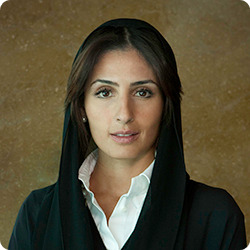