Prior to becoming President in May 2022 His Highness Sheikh Mohamed bin Zayed Al Nahyan holds a wide range of policy, legislative and economic responsibilities in Abu Dhabi and the UAE. He is a committed conservationist and philanthropist.

The environment is one of Sheikh Mohamed's highest priorities, from a policy and a personal perspective. He was instrumental in the establishment of the Environment Agency - Abu Dhabi, and has led significant conservation efforts to protect the falcon, houbara bustard and Arabian oryx within the UAE and internationally. In January 2008, His Highness announced the Abu Dhabi Government would contribute US$15 billion to Masdar, the global standard-setting alternative and renewable energy initiative based in Abu Dhabi, and developer of the world's first carbon-neutral, zero waste city.

In addition to these responsibilities, His Highness is Chairman of Mubadala Development Company, an investment organization owned by the Abu Dhabi Government. 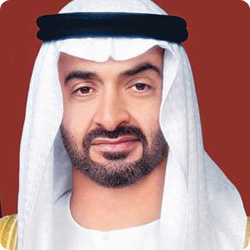