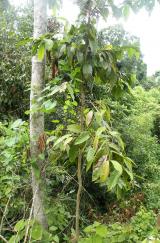 Stresses of forest fragmentation and overexploitation of forest resources has resulted serious degradation of preferable habitats, and thus many species are now at the brink of extinction. Particularly, species which have been listed in the Critically Endangered (CR) category by IUCN deserve immediate attention as their natural population decreasing quickly due to lose of natural habitat along with other existing anthropogenic disturbances.

Dipterocarpus gracilis Blume (DIPTEROCARPACEAE) is a Critically Endangered (CR) tree species listed by IUCN, which mainly distributed in Southeast Asia. In India, this species was reported from Andaman Island, Arunachal Pradesh, Assam and Tripura; where limited populations are exists only in some Protected Areas (PAs).

Hence, the project was designed to collect field datasets on the identity, geographic distribution, habitat preferences and population status of D. gracilis in Tripura. The participatory organization is Department of Botany, Tripura University.

The study would be highly desirable for recommendation of conservation strategies of this critically endangered tree. Natural regeneration and seedling growth information would be useful in future for development of nursery and silviculture techniques. The data would be used for establishment of regional level plantation and to monitor the existing wild stock. The causes of habitat lose and disturbances could be possible to sort out through threat assessments. Geographic distribution data would be used for preparation of population geo-distribution maps along with its habitat preferences and associates plants. Besides population data, other environmental and habitat information would be useful for preparation of Ecological Niche Model (ENM) for this tree. The baseline data not only help to long term monitoring of wild population of this tree but also subsequently contribute towards the conservation of threatened wildlife along the habitats of D. gracilis .