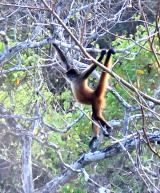 The mission of the Azuero Earth Project/Proyecto Ecológico Azuero is to preserve the earth`s ecosystems, protect biodiversity, and promote healthy communities by helping people to make informed decisions, take sustainable actions and share knowledge. Despite its small size, Panama is home to one of the largest populations of environmental scientists in the world, but as yet there is very little governmental commitment to the environment. The Azuero Peninsula, on Panama`s Pacific Coast has been populated and deforested by man for over 12,000 years. It is geologically much older than the rest of the country, and has consequently developed as a unique environment. Successive waves of slash and burn clearing for cattle grazing has left little standing forest. Many species have been left without cover and hunted to near-extinction. All that is left of its original dry forest habitat are remnant patches and some poorly protected small forests.

The Azuero Earth Project is working on the Azuero Peninsula to protect endangered species and preserve biodiversity.We are identifying and ranking remnant dry forest fragments and connecting them in a mosaic of restored forest and sustainable farming: the Red Verde, a safe place to live for all species. The Azuero Earth Project is engaging local landowners in a process of education, preservation and restoration. We will provide economic opportunities and technical companionship to enable replacement of degraded pasture with sustainable alternatives that connect forest remnants and support a broad range of species.

The Azuero Earth Project invites and students, faculty and scientists, locally and internationally, to assist in and benefit from what we are learning and teaching. We aspire to be the center for environmental information on the Azuero; a place to educate and inform the population of the Azuero, Panama and the tropical world in the process of biodiversity protection and species preservation. The Azuero Earth Project was created in 2007 and received its US 501-C-3 not for profit tax approval in 2008.

The Azuero Earth Project has chosen Ateles geoffroyi azuerensis as its mascot and key species because its fragile existence represents a perfect indicator of success of failure. It plays an essential role in seed dispersal and forest regeneration; apparently far more so than any other species. The amount of research and information on the species, which could contribute essential keys to its preservation, is very scarce. There appears to be reason to believe that Ateles geoffroyi azuerensis represents a unique species. The primary populations of the Azuero Spider Monkey have been recorded in the western regions of the Azuero peninsula, and Cerro Hoya. However, recent (unsubstantiated) sightings in areas of native species reforestation and secondary successional dry forest in the area of the Achotines Laboratory on the Azuero`s eastern coast have been reported. The fact that this area has a higher concentration of native species reforestation and spontaneous regeneration is a phenomenon worthy of further research.