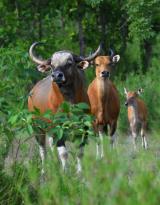 This community conservation project, implemented by villagers from Prambei Mom Commune in Kampong Speu Province with support from Wildlife Alliance, provides in situ conservation and monitoring of a recently discovered wild population of Bos javanicus (banteng). Banteng is a Southeast Asian wild cattle species. Currently IUCN Red-Listed as Endangered, according to IUCN’s most recent assessment, the remaining global population is estimated at just 4,000-8,000 and declines are expected to reach the 80% threshold for re-listing as Critically Endangered. Extirpated from most of its native range, IUCN believes northeastern Cambodia contains 60% of the world’s remaining banteng, with just 6-8 subpopulations of more than 50 animals outside this area (Gardener et al., 2016). Until 2017, scientists believed banteng had been extirpated from southwestern Cambodia (Gray et al., 2017). However, in 2018 Wildlife Alliance (WA) staff saw posts on Facebook by Prambei Mom villagers appealing for help to protect several herds of banteng that have survived thus far thanks to their vigilant protection. These local community members had been protecting ‘their’ banteng, without assistance, since 2003.Unfortunately, threats to this highly vulnerable population are escalating. Locals report about fourteen banteng poached since 2013, with three killed since 2018. Since WA became involved, there have been significant improvements, including a reduction in the number of snares and a cessation in shooting, which used to occur on a regular basis, since the imprisonment of a hunter apprehended by WA rangers. The Cambodian Forestry Administration is also now taking an interest, as demonstrated by the donation of a fire engine on February 29th 2020, to help extinguish the forest fires that take place on a regular basis during the dry season.

The total banteng population in Prambei Mom and the broader Oral Division in which it sits is unknown; however, from preliminary camera-trapping and interviews, it likely exceeds 50 animals.The Oral population likely represents the last remaining banteng from the Cardamom Rainforest ecoregion, and is of global importance with distinct genetic, cultural and ecological significance. The objectives of this project are to improve protection of banteng in Prambei Mom and conservation management of banteng throughout the Oral Division. The primary activity is daily patrols of the 1,000 hectare proposed Prambei Mom Community Forest by a Community Anti-Poaching Unit (CAPU) composed of villagers who remove snares, deter hunting, and address any other threats. Funding from the Mohamed bin Zayed Species Conservation Fund has enabled us to expand this project to include camera trap monitoring in the Prambei Mom Community Forest and scoping research throughout Oral Division. We will produce the first scientific estimate of the Prambei Mom population’s size, and engage the Cambodian Forestry Administration and community members in on site, scoping research and field visits to identify and map additional sites where banteng may remain throughout Oral Division. Research findings will be disseminated to raise awareness nationally and internationally about the Oral banteng population with the aim of improving management and ensuring its long-term conservation.