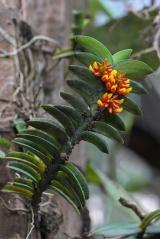 In 1997, a research consortium was initiated between the University of Yaoundé I (Cameroon), the Missouri Botanical Garden (USA), the Université Libre de Bruxelles (Belgique) and the Institut de recherche pour le développement (France), along with other local partners to help improve the understanding of the systematic, biogeography and conservation of the charismatic orchid family (www.orchid-africa.net). To study orchid diversity and accurately identify and conserve species, an innovative shadehouse cultivation system was successfully developed and employed in tropical Africa, enabling the discovery to date of one new genus and more than 50 new species, while also enabling their ex situ conservation. The close collaboration between researchers from Institut de recherche pour le développement and the University of Yaoundé I has contribute to training of Cameroonian students in standard conservation biology methods and monitoring techniques, as well as more recently developed approaches (e.g. camera traps, tree climbing, seed banking).

Our fieldwork activities and orchid shadehouses network are mainly focussed on taxa occurring in Central African tropical forests. The present project will be conducted in Cameroon, where we have established over the last 12 years what represents to date the largest ex situ collection of orchids in Africa, with more than 6,500 living specimens representing ca. 250 species cultivated in the Yaoundé shadehouse. The present project focus on the Cross-Sanaga-Bioko Coastal Forest ecoregion, especially on the Mungo River Forest Reserve (5,387 ha) and the Banyang-Mbo Wildlife Sanctuary (66,000 ha). This centre of endemism is one of the most diverse in Central Africa, but also the most threatened due to logging and palm plantation projects. The vegetation is a mosaic of highly degraded/cultivated area and fragments of humid, species-rich evergreen forest, with only a few areas that are effectively protected. The region is famous for its rate of endemism, including in the genus Ossiculum, but even more for its large populations of large, emblematic mammals, such as the Cross River Gorilla subspecies, the world’s rarest great ape (Gorilla gorilla subsp. diehli, CR, see this link), Nigeria-Cameroon Chimpanzee (Pan troglodytes subsp. ellioti, EN) and the African Forest Elephant (Loxodonta cyclotis), but it still lacks flagship plant species for efforts to conserve its rich but endangered Flora.

The monotypic genus Ossiculum was first discovered in 1980, inside the Mungo River Forest Reserve (MRFR). During the following quarter century, the sole species, O. aurantiacum, was not collected again, even though several thousand botanical collections have been made in the MRFR area (Ossiculum on IUCN Red List Portal). Recent road construction along the edge of the reserve provides greater accessibility to the area where the species was originally collected, but has also resulted in intensification of forest clearance and encroachment of small-scale cash-crop agriculture. Based on the unique collection, O. aurantiacum was assessed as Critically Endangered by IUCN. However, our recent intensive orchid fieldwork in Cameroon resulted in new collections from two localities in the Banyang-Mbo Wildlife Sanctuary. In both sites, the species was found in the canopy of large trees in moist lowland forest. The Banyang-Mbo Wildlife Sanctuary is widely held to be one of the most biologically important forest complexes in West Central Africa, harboring 325 documented bird species, 33 large mammals and 63 reptiles from 18 families. Plant diversity remains to be extensively studied in this area. Recently, a large industrial-scale palm oil plantation project (see this link) was developed in the southwest of the sanctuary, isolating the biodiversity it contains and endangering the threatened species living within and around the plantation, including our targeted species, O. aurantiacum.

This project will contribute to the long-term conservation of the highly threatened species Ossiculum aurantiacum using an integrated approach involving the training of African scientists and students. Broad, detailed knowledge of the targeted species will be obtained and then used to design and promote effective conservation measures, such as long-time ecological survey work and banking viable seeds. In addition to in situ efforts, our expanded ex situ program will aim to insure the persistence of this highly threatened orchid genus and its associated flora and habitat. Specifically, we aim to:

2. study the ecology, and especially the pollination biology, of O. aurantiacum via monitoring of in situ populations. We will use the rope climbing method to access viable populations in the canopy and camera traps to elucidate key aspects of its breeding system;

3. develop local infrastructure and capacity for the long-term conservation of the target species and other rare species cultivated in our African shadehouse network;

4. use these data to update the IUCN Red List assessment of O. aurantiacum IUCN and generate long term conservation plans that include proposed management actions.