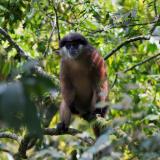 Illegal bushmeat hunting across Bioko Islands protected areas has been well documented and is threatenting the viability of its seven diurnal primate species. The Bioko Red Colobus, Procolobus pennantii, the only endemic primate species on the island has been recognized as one of the most globally threatened primates. In collaboration with the community conservation organization, Bioko Biodiversity Protection Program (BBPP), I will be conducting surveys for 3 months in areas of the Gran Caldera Scientific Reserve that have been un or under-surveyed in search of viable populations of this endangered species.

My local team and I will be collecting GPS locations of visual sightings and alarm calls of primate groups, as well as signs of gun hunting and snare trapping. These results will help management understand how the Bioko Red Colobus and other primate populations are reacting to outside human pressures that are prevalent due to little conservation management and enforcement. With the completeion of this project, results will be disseminated to the wildlife authority, El Instituto de Desarollo Forestal y Areas Protegidas, to inform recommendations for priority protection zones based on one of Bioko’s more endangered species. The proposed project will improve knowledge of Red Colobus populations, conservation for endemic forest inhabitants, and threats from hunting pressure on Bioko Island.