Conservation of Game Birds in the Brazilian Atlantic Forest: Reintroduction and Monitoring of the Black-fronted Piping-guan (Aburria jacutinga). 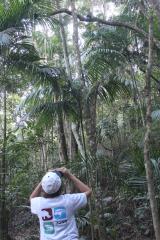 Considering the alarming situation faced by Black-fronted Piping-guans (Aburria jacutinga) in the Atlantic Forest, in 2010 SAVE Brasil started its project entitled: Conservation of Game Birds in the Brazilian Atlantic Forest: Reintroduction and Monitoring of the Black-fronted Piping-guan. Results of the population census conducted during the project's first phase (2010-2013) confirmed the species' rarity in the Serra do Mar region and the need for urgent population reinforcement in order to avoid a local extinction. The Black-fronted Piping-guan is globally listed as Endangered (BirdLife International/IUCN, 2017), and as Critically Endangered in the state of São Paulo. In the state of Rio de Janeiro, the species is extinct and was last seen in 1980 in Serra dos Órgãos. This led to an extension of the project to this state, in Reserva Ecológica de Guapiaçu (REGUA).

The project's second phase initiated in 2014 and aims to reintroduce and monitor the species in Serra da Mantiqueira and Serra do Mar, in São Paulo, and REGUA, in Rio de Janeiro.
The Black-fronted Piping-guan is an excellent seed disperser, feeding on more than 40 fruits of the Atlantic Forest, collaborating in the maintenance and restoration of the forest and its hydric system.
The project's first reintroduction of 9 guans happened in June 2016, in Serra da Mantiqueira. All birds are currently being monitored by satellite transmitters, active search and by the community through a participatory monitoring approach based on the premises of citizen science. The second release of two couples happened in Serra do Mar in June 2017. The Project's overall goal is to improve the species conservation status by increasing its population. The project's actions are contemplated in the National Plan for the Conservation of Galliformes published by the Brazilian National Government's wildlife agency - ICMBio in 2007 and in the National Plan for the Conservation of Atlantic Forest Birds, of 2017.