LANDSCAPE AND HISTORY OF LAND USE: EFFECTS ON SPATIAL DISTRIBUTION, DENSITY AND PERSISTENCE OF Callicebus barbarabrownae (Hershkovitz, 1990) 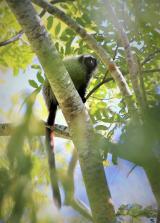 Blond Titi Monkey (Callicebus barbarabrownae) is the only endemic primate of Caatinga biome (a semi-arid savanna endemic of Brazil). It was described by science 25 years ago, and forgotten for 8 years when it was "rediscovered", in 1991. Between 2004 and 2005, five expeditions were conducted in order to map the geographical distribution of C. barbarabrowneae, which results in the first conservation status diagnosis for the species. Nowadays, it is classified as Critically Endangered (IUCN).
Blond Titi Monkey lives mostly in dry forests and shrubs of Caatinga, rarely being recorded in evergreen forests. Its name in Portuguese ("Guigó") comes from the typical vocalization, and the sertanejos (Caatinga's traditional people) believe that when Blond Titi vocalizes, rain is coming. Blond Titis are very shy and its fur camouflages very well in the dry vegetation. Most people can recognize Blond Titi's call, although spend their entire lives without seeing it.
Since 2016, a new research project started to assess the recent conservation status of the Blond Titi monkey. The current study area comprises the Caatinga of Bahia and Sergipe states, bounded by the São Francisco River on north and west, and by the Atlantic Forest on east, and by the Sincorá Hills on south. The current project is in accordance with the National Action Plan (Brazilian Enviromental Minestery) for the Conservation of Northeast Primates (PAN Prine), aiming to:
• To revisit locations with historical Blond Titi occurrence to confirm its current presence.
• To evaluate Blond Titi geographical distribution in a 12-year period, based on species-landscape relationships.
• To identify factors related to local populations persistence to guide conservation actions.
• To estimate the abundance of Blond Titi in different vegetation types of Caatinga.
• To reassess Blond Titi conservation status.
• To identify locations for protected areas aiming Blond Titi conservation.
Due the high levels of Caatinga devastation, the survival of this species relies on the remaining areas and the planning of land use to allow connection between occupied and non-occupied areas. This project will bring essential information to evaluate the specie's conservation status and habitat quality.