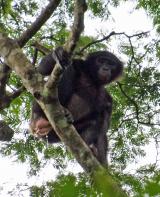 Bonobos and elephants are declining in number because of bushmeat and ivory poaching in the Democratic Republic of Congo. The Bonobo and Congo Biodiversity Initiative (BCBI) conserves bonobos, forest elephants and other key wildlife in the Salonga National Park.

Created in 1997 by the Zoological Society of Milwaukee, BCBI's objectives include:

For our Mohamed bin Zayed Species Conservation Fund grant, BCBI is collaborating with the ICCN (Congo's park authority) to establish and operate a needed patrol post on the Yenge River, the heart of the Salonga National Park and a former elephant poaching stronghold.

A World Heritage Site, national park represents the largest expanse of legally protected bonobo and forest elephant habitat in the Democratic Republic of Congo. The park protects up to 40% of the world's bonobo population. It is the only protected area where bonobos and elephants still occur together in substantial numbers and where elephants play a major role in shaping the forest dynamics. However, in recent years, the park has been plagued by poachers. Driven by the surging demand for ivory, the number of poachers entering the park in recent years is unprecedented in BCBI's 16-year experience. Elephants are the primary target of hunters; however, all species are vulnerable.

An area of BCBI's concern is the Yenge River - a river completely within the bounds of the park - that was a primary poaching route into the Salonga's deep interior forest. Until recently, the lower Yenge was controlled by poaching gangs. However, in late 2011 (until present), joint operations by the ICCN and national army "cleared" the region of poachers. BCBI used this unique opportunity to assist the ICCN in building a strategic patrol post at Lotulo on the Yenge River where no patrol post previously existed and where poachers would surely return unless a permanent law enforcement station was put into place.

The Zayed Species Conservation Fund grant is providing the initial start-up funds for the Lotulo Patrol Post, thus protecting important populations of bonobos and elephants. 4,000 to 6,000 bonobos and approximately 20% of the park's remaining elephants reside in BCBI's primary conservation/study area, the Watsi Kengo Sector, the corridor between the Salonga and Yenge Rivers.