The Mohamed bin Zayed Species Conservation Fund has awarded 104 grants constituting a total donation of $1,121,550 for species conservation projects based in Oceania.

Establishing a new colony of endangered Hutton's shearwaters by translocation of chicks from a mountain colony to the Kaikoura Peninsula, New Zealand.

New Zealand's native Archey's frog is number one on the amphibian EDGE list. It is threatened by predation from introduced mammals. To assess the level of predation we have developed molecular techniques to identify frog prey in small mammals diets, as traditional approaches were unreliable. So far these have been successful and can also be applied to any predator-prey diet study. 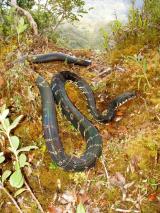 Boelen’s python (Morelia boeleni) is endemic to New Guinea found in highlands above 1000 m and below the tree line. Our recent work on the conservation genetics of this species, the first ever genetic survey of this species, shows that all captive and wild M. boeleni are genetically uniform and raise particular concern for the limited genetic diversity of M. boeleni used captive breeding programs.