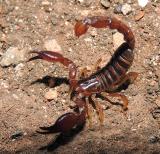 The Caribbean Islands Hotspot is amongst the leading regions of the planet in terms of biodiversity and endemism. This hotspot stands out by its high number of single-island endemic species and genera. Scorpions are a perfect example of such outstanding biodiversity: more than 150 species have been reported to the region, being 96% of them endemic. The Cuban archipelago in particular contains by far the largest island of the Caribbean and the richest biota, with endemism levels frequently exceeding 90%. This island shelters the richest scorpion fauna of the region and constitutes the country with more species relative to land surface of the world: 55 species were recognized as valid until 2015, 91% endemic(Teruel &KovaÅ™ík 2012, Teruel 2013). Particularly, the burrowing scorpions’ family Scorpionidae comprise 14 species in four genera in this country, all endemic and with restricted distribution ranges. The specific ecological requirements of burrowing scorpions make them a highly sensitive group of arthropods with urgent conservation need.

The Neotropical burrowing scorpion genus Didymocentrus has a disperse and controversial distribution, being three species endemic to the central region of Cuba, its only representation in the Greater Antilles (Teruel & Rodríguez 2008). These three species are habitat-specific and their populations are severely fragmented because of the accelerated human-induced habitat loss. A first approach to their conservation status revealed that one of them (D. trinitarius) fulfill the IUCN criteria for the category of Endangered, while the remaining two (D. jaumei and D. sanfelipensis) for the category of Critically Endangered. However, the two most threatened species are by far the least studied. Their highly fragmented distribution, limited to five localities each restricted to isolated patches of native vegetation, suggests little likelihood of genetic exchange among subpopulations. This impose serious threats inherent to small populations: random loss of genetic variation, inbreeding and high vulnerability to stochastic events. Also, D. sanfelipensis is exclusive to serpentine-derived soils from inland central Cuba. The serpentine areas are considered among the greatest centers of vascular plant diversity and endemism in the Caribbean region. In Cuba, nearly 15% of the total flora is serpentine endemic. This unique type of vegetation is threatened by forest fires, deforestation and replacement by introduced invasive species.

The effectiveness of Action Plans greatly depends on the accurate delimitation of conservation units. Knowing the population genetic structure and ecological requirements of a target species or group is of paramount importance to elaborate effective management plans and conservation strategies. During the first project on these burrowing scorpions we focused mainly in gathering baseline information on the ecology and behavior of the southernmost species, D. trinitarius. Also, filling important distribution gaps allowed us to realize that D. armasi apparently constitutes a junior synonym of the former. Therefore, all populations from southcentral Cuba seem to constitute a single species with fragmented distribution. We also made important community-based education work in several localities of central Cuba, cultivating positive attitudes in local people. During this second project we aim to extend our work to the remaining two species (D. jaumei and D. sanfelipensis), which are supposed to be the most threatened of the genus in the island. We will also collect tissue samples for further genetic analysis to help in solving the species boundaries and population genetic structure within each species, allowing delimitation of conservation units.

2.  To create a collection of tissue samples from all known Didymocentrus populations for further genetic analysis.

3.    To reassess the conservation status and potential distribution of all Didymocentrus species.

1.     - To ground-truth historical records and new areas with potentially suitable habitat for the target species based on the ecological niche models generated during the first project.

2.     - To collect critical ecological variables for the occurrence of the target species and identify all threats natural and anthropogenic affecting their populations.

3.  - To collect tissue samples (averaging three samples per locality) all across the geographic range of Didymocentrus in Cuba for further genetic analysis.

4.    - To generate more accurate distribution models using GIS technology and based on the detailed and updated information gathered during the field work phase of this project.

5. - To reassess the conservation status of both Didymocentrus sanfelipesis and Didymocentrus jaumei based on the distributional and ecological information gathered during the field work phase of this project.