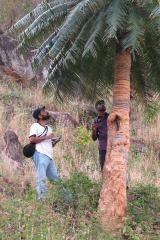 Among the 12 cycad species reported from India, this is the only Critically Endangered species according to IUCN red list. Currently the species is surviving with hardly about 100 individuals in a single population in the type locality where the numbers of reproductively mature individuals are less than 20. Since these 20 individuals do not cone frequently the annual fecundity rate is critically low.
The presently known habitat of this species is a highly disturbed reserve forest outside the protected area network suffering from cattle grazing, local hunting, unsustainable collection of forest produces and frequent fire events. Consequently, C. annaikalensis suffers direct threat from collection of whole plants, leaves, cones and seeds by local people, traditional healers and plant sellers for various purposes.
This situations leads to very fast depletion of the number of individuals in the population. So the species can face a number of typical conservation problems like inbreeding, genetic bottlenecks, breakdown of pollination and dispersal mutualisms, elimination of root symbionts and increased vulnerability to stochastic events (drought, fire, etc). These are serious impediments of the long term survival of such a critically small population. In this context, the present project aim to: •Assess population size, distribution of individuals, sex ratio, adult-juvenile ratio and size classes of known population.•Survey the surrounding forest areas to locate subpopulations, if any.•Understand the extent of anthropogenic impact on population like harvest of leaves, seeds, seedlings and mature plants, and its impact on the demography and future survival. •Assess variation in genetic diversity, genetic structure and demographic history of the known population of C.annaikalensis and among sub-populations, if any. •Raise as many as seedlings by collecting seeds from the collectors and natural population to strengthen the existing population, subpopulations, if identified, and to maintain a gene pool in the mother institution. •Sensitize and raise awareness among the local people and other stakeholders on the conservation of C.annaikalensis through participatory approaches.