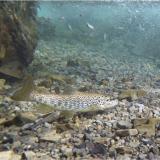 The Dades trout Salmo multipunctatus Doadrio, Perea, and Yahyaoui, 2015, is a salmonid fish, which is endemic to Morocco. It lives only in the headwaters of the Dades and M'Goun rivers (<22 km stream length), on the southern slope of the High Atlas Mountains. The two remnant populations are distant (218 km) and genetically differentiated (Clavero, pers. Com). Clavero et al. (2017) evaluated the species global conservation status using the IUCN Red List Categories and Criteria, Version 3.1 (IUCN, 2012). See https://doi.org/10/1017/S0030605316001551. Strictly observing IUCN guidelines for criterion B, the Dades trout should be categorized as EN B1 ab(i,ii,iii,v) + 2 ab(i,ii,iii,v). However, Clavero et al (2017) proposed a more flexible interpretation of the guidelines, allowing for the ecological soundness of distribution metrics, which leads to the categorization of the species as CR B1 ab(i,ii,iii,v) + 2 ab(i,ii,iii,v). the Dades trout is found only above 2145m and it was not found to coexist with other fish species. The entire distribution range of the Dades trout encompasses at most 22 km of stream channel in two isolated reaches, across an elevational range of c. 200 m.  A future decline in habitat suitability for the Dades trout is projected, based on the effects of global climate change. This decline will specifically affect those areas that are currently occupied by the species. The loss in habitat suitability will be less pronounced at higher altitudes, but permanent water streams are not found there. Furthermore, the presence of waterfalls in the M'Goun channel precludes upstream migration of the species. Therefore, a continuous decline in both the area of occupancy and the quality of habitat is projected, which will affect the size of the population and the extent of occurrence.The goal of this proposal is to initiate a recovery plan for the Dades trout. To achieve this goal, we identified the following objectives: i) Monitoring: a) the current species distribution using electrofishing and snorkeling along with capture-recapture, and b) the historical distribution through surveys of the popular knowledge of people about the trout, including a compilation of the personal life-long perceptions on changes in trout distribution and abundances c) the temporal patterns of trout occurrence within suitable habitat patches using GIS modeling. ii) Evaluating the seasonal fish body condition and reproductive status, the age/stage population structure, and monitoring the trout population abundance using the removal method along with snorkeling surveys. iii) monitoring stream-riparian habitat quality and quantity (temperature mapping, state of riparian vegetation), and assessing the impacts of adverse factors related to land resource use and changes in water management on the habitat quality and trout abundance using small-scale fenced vs. unfenced stream-riparian habitats experiments. iv) Restocking/reintroducing wild-caught trouts to suitable habitats with low abundance/absence of trouts, within each of the two distinct genetic stocks of Mâ€™Goun and Dades areas. v) Raising community awareness and educating schoolchildren about the importance of preserving wetland biodiversity using the Dades trout as flagship species.