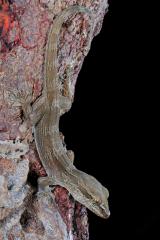 The objectives of this project on the ecology of the Critically Endangered dragon blood tree's gecko (Hemidactylus dracaenacolus) of Socotra Island, Yemen, are collecting distribution and diet data for predicting the occurrence of the species, understanding its ecological limitations and preferences as habitat and diet, and reviewing its conservation status to assist conservation actions.

This project on the Critically Endangered dragon blood tree's gecko (Hemidactylus dracaenacolus) and the Grant's leaf-toed gecko (Hemidactylus granti) will explore the Diksam and Haggeher mountains of the Socotra Island, a UNESCO world natural heritage site included in the Horn of Africa Biodiversity Hotspot.

The six main objectives of the present project are to:

1) Collect presence point data. There are very few presence data available in the bibliography for these two species, even fewer if we consider that most were not genetically confirmed. During the field expedition to Socotra, presence data will be collected with GPS precision for both taxa and a certain identification of the species will be performed based on detailed observation and photographic documentation of all specimens found.

3) Derive predictive models of occurrence. We will combine presence data, based on bibliography and data collected during fieldwork, with high resolution layers of environmental factors (topography, solar radiation, vegetation cover) using Maxent modelling software to quantify relationships between species presence and environmental variability. This will result in a map of probability of occurrence, which will be useful for conservation purposes as it might identify possible new areas where the target species are likely to be present. It will also measure the importance of each environmental factor on the distribution of each species.

5) Study the diet. Faecal pellets will be collected from both species and tissue analyzed with stable isotopes to understand if the two species ecological feeding niches are different or overlapping. This will gives clues to understand if competition for feeding resources might occur and will help to explain the species distribution patterns.

6) Produce data for conservation status assessments. The information gathered and results obtained will be used to redefine the areas of occupancy (AOO) and extent of occurrence (EOO) for H. dracaenacolus and H. granti and compare with previous values to check if those are declining or not, a valuable information for the next conservation status assessment.