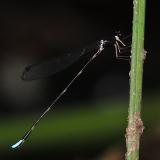 Drepanosticta spatulifera (Liefthinck, 1929) is a Java endemic of damselfly. Based on the IUCN Red List of Threatened Species, D. spatulifera included in data deficient status. Previous research was done by Liefthinck (1954) based on Drescher (1927), only 12 male and 14 female of D. spatulifera were found in Mount Slamet area, Baturaden, Central Java. More than 50 years no expert sampling to assess D. spatulifera in Java.

In 2013, we found D. spatulifera in Mount Ungaran, Central Java.  We observed it in three locations, there are Semirang Waterfall, Gonoharjo Forest, and Kalisidi Waterfall. Usually we only find D. sundana and D. gazella.

The size of D. spatulifera is littler than D. sudana or D. gazella. The easiest way to determine it is from black colored in all body and blue colored in tip abdomen. Its size and color makes it hard to observe. On the other hand, it perches surrounding stream with dense riparian of shrubs or herbs.

Recently, we found D. spatulifera  in other location of Mount Ungaran and Petungkriyono Forest.  We thought that it is important to observe further because it is rare and has special niche. It has the potential to become an indicator for forest health.