Epirus grasshopper conservation: linking ecology and genetics and under a conservation perspective 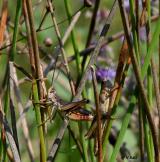 Chorthippus lacustris is an endemic grasshopper of Greece, assessed as critically endangered in IUCN red list and in the Greek red data book. Being a stenoendemic, with a highly fragmented distribution pattern and seven remnant populations or less, the species is at high risk of extinction. It has a narrow ecological niche and a low dispersal ability that render it particularly vulnerable to habitat loss. It inhabits exclusively wet temporary grasslands that are flooded in wintertime and offer luxurious tall herb communities for feeding at summer (breeding season). It still occurs in three protected areas of the Natura 2000 network in Epirus, though no conservation action or survey is taking place there. Its habitat loss was dramatic the last century (85-99%) and it is still ongoing, due to urbanization (Ioannina city expansion and touristic investments), drainage, land conversion to agricultural fields, and intensive cattle grazing. Its population trend and genetic structure are unknown. The impact of threats to its conservation status still needs updating. Habitat restoration is urgently needed, as wet grasslands are vulnerable habitats of high conservation importance for the species, but for other sympatric species as well.

The project aims at increasing our scientific knowledge on the conservation status and genetic risks of Epirus grasshopper endemic populations, so as to support its conservation in practice. Fieldwork has been undertaken in summer of 2016, in order to delineate its current distribution area and assess its population status and trheats. Preliminary results are discouraging, with the species risking to be extinct in three known localitie (one of them in Natura 2000 protected area), but still maintaining adequate population densities in others (see preliminary distribution map). Habitat degradation is continuing with urbanization (Pamvotis lake basin), drainage, land use change from pastures to agriculture and cattle grazing being the most prominent. Ecological data analysis and genetic analysis are going to be undertaken the forthcoming months and our research outputs are are planned to feed the first action plan for the species conservation.

We were happy to train staff from the Management Body of the Lake Pamvotis (Natura protected area) and other volunteers in the field, under the scope to set a systematic monitoring scheme for the species in the future. We have already started to raise public awareness for the species survival. It is largely dependent on local people support and political will from local authorities to face the conflicts to be arise with land owners in order to prevent its extinction. Wish us good luck!