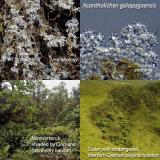 Lichens are small organisms that are frequently overlooked by species conservation. They are symbiotic organisms, where a fungus (the mycobiont) forms the macroscopic structure called "thallus", which is inhabited by a population of microscopically small algal cells (the photobiont).

Lichens inhabit all kind of substrates and environments. They typically grow, where many other organisms find it difficult to survive. Lichens grow on the bark of trees, in the tropics they inhabit even the surface of leaves. They grow on wood, rarely also detritus. As reindeer lichens they are a common element in heathlands, often surviving far beyond the timberline, or they cover soils that are too poor for plants to grow. As soil crusts they prevent the erosion of deserts, and many species inhabit even bare rock.

Lichens are often spectacularly colorful, nevertheless they are typically tiny and even scientists unfortunately often tend to ignore these highly diverse species.

With the funds from the Mohamed bin Zayed Species Conservation Fund we are now working on the first IUCN red list of Galapagos endemic lichen species. These activities include:

- Submitting assessments to the IUCN

- Present our project at the international meeting of the Grupo de Liquenólogos de América Latina (GLAL) in Quito, Ecuador in November 2015