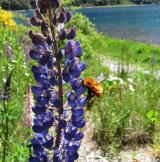 We aim to encourage recovery of B. dahlbomii populations by boosting the success of emerging foundress queens through culling invasive bumblebees, to reduce pathogen spillover and competition for nesting and food resources. While the viability of this approach will be tested at specific target sites and thus cover a local scale, target sites have high visibility by visitors, enabling their use as case examples in community science and public outreach programs reaching a much broader area. We expect that by combining on-site actions with broad communication, we can foster awareness about the problem of invasive species, and thus enhance our objective of promoting instances of dialogue between Argentinian and Chilean authorities to downregulate the importation of European bumblebee colonies in Chile. Our specific objectives are. 1) At the local scale, to remove B. terrestris in selected sites in the ANPBR. 2) At the regional scale, to promote empathy, critical thinking and commitment in local communities of the ANPBR on this species to favor educational, communication and active actions towards its conservation- 3) At the national and binational scales, to promote the instances of dialogue between Argentinean and Chilean authorities to regulate the importation of European bumblebee colonies in Chile.