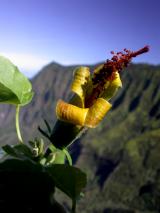 Utilizing drone technology, researchers from the National Tropical Botanical Garden (NTBG) on Kauai recently rediscovered a native Hawaiian plant that was thought to be extinct.

The plant, called Hibiscadelphus woodii, was rediscovered in a small colony of three individuals growing on a vertical cliff face in a remote part of Kauai’s Kalalau Valley (watch drone footage above). The cliff region is known as a biodiversity hotspot in the Hawaiian Islands where most sections are inaccessible to humans as well as goats that otherwise pose a threat.

The rediscovery of H. woodii, listed on the IUCN Red List of Threatened Species as an extinct relative of hibiscus, provides a dramatic example of the growing importance of drones in conservation work. H. woodii, known only from the island of Kauai, was last seen alive in 2009, leading scientists to recognize the plant as extinct.

Hibiscadelphus woodii was discovered by NTBG botanists in 1991, growing on a sheer cliff in Kauai's Kalalau Valley. The new species was officially named and published in 1995.  At the time, the discovery increased the number of Hibiscadelphus to seven species, which are all limited to the Hawaiian Islands. An eighth species, H. stellatus, was discovered on Maui in 2012. Previous to this rediscovery, six Hibiscadelphus species were recognized as extinct in the wild. The other two species with wild survivors are H. distans on Kauai and H. stellatus on Maui.

Hibiscadelphus woodii grows as a shrub or small tree and produces bright yellow flowers which turn purplish-maroon as they age. The nectar-rich flowers are likely pollinated by native honeycreeper birds including the amakihi.

The rediscovery of H. woodii offers new hope that other ‘thought-to-be-extinct’ species may still survive in difficult to access areas. NTBG’s Director of Science and Conservation Dr. David Lorence said, “This incredible rediscovery was made possible by our staff using drone technology and was supported by a grant from the Mohamed bin Zayed Species Conservation Fund. Drone technology greatly facilitates botanical surveys in rough terrain areas.”

Ben Nyberg, GIS Coordinator and drone specialist for NTBG added, “Drones are unlocking a treasure trove of unexplored cliff habitat, and while this may be the first discovery of its kind, I am sure it won’t be the last.”

Since the 1990s, NTBG has played a leading role in plant discovery in Hawaii and the Pacific. Working in partnership with state, federal, and private conservation agencies and organizations, NTBG continues to conduct field surveys, discovery, and the collection of rare and endangered plants across Hawaii and the greater Pacific region.