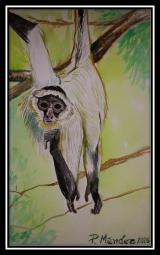 The spider monkey A. g grisescens was described in 1865, on the basis of an activity of collection of specimens held by the Zoological Society of London, United Kingdom (Gray, 1866). The type locality of this specimen is unknown according to the British Museum of Natural History, however it was determined to be present at the Valley of Tuira river, southeast of Serrania del Sapo, and southeastern end of Panama which bordered the Cordillera del Baudo northeast of Colombia (Kellogg and Goldman, 1944). At the time, and on the basis of an assessment of literature by FCPP primatologists and other experts of the Neotropics, in reviewing our panamanian species and their conservation status, this is the only non-human primate in Panama that is still with Data Deficient (DD) according to the IUCN Red List criteria of the International Union for the Conservation of Nature (IUCN, 2015). However, being the distribution reported for this subespecies near to indigenous groups that live under subsistence, practice logging activities and hunt spider monkeys as a protein resource, we consider this species could be on threat.This project is aimed at making a direct sampling in areas where there is potentially presence of this subspecies so that we can confirm your presence/absence, its current distribution and the current state of its natural habitat, previously reported. The research is a crucial first step to focus conservation activities in line with the local communities living there, as it has been doing by FCPP in other areas of Panama. This primate has never been studied since1944, and remains as a myth in Panama, although confirmed in Colombia (Rylands et al. , 2006). Being absent, would mean the first non-human primate extirpated in our Republic, so the assessment for conservation plan is in an urgency.