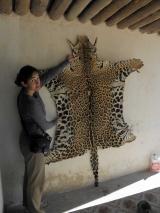 In Argentina the jaguar (Panthera onca) is classified as endangered and its populations have diminished by 85%. Currently it only occurs in three isolated regions of the country and research on jaguar ecology and conservation has concentrated only in two of them, the Yungas and the Atlantic Rainforest, with very little research on the species in the Chaco region. The information vacuum is a major obstacle to planning regional conservation strategies. In addition, the other big cat of the region, the puma (Puma concolor) has also been studied in other regions of the country, but no studies on its ecology in the semiarid Chaco region exist, and its response to human pressure environmental changes here is unknown. Due to its potential competitive effect, understanding the population status of this other species of great cat in the region can help us better understand some aspects of the ecology and conservation of the jaguar.

The American Gran Chaco is considered unique for its environmental and cultural characteristics, and the Argentine semi-arid Chaco was identified by Wildlife Conservation Society (WCS) as one of the new highest priority Jaguar Conservation Units. Unfortunately the region has suffered for decades now a severe environmental deterioration because of the advancing agricultural frontier, uncontrolled fire, indiscriminate hunting, and intensive forest exploitation. The Chaco populations of jaguar and puma are threatened by these activities, but the principal conservation problems for the species in the region are unknown. Additional research is also required to determine whether their co-existence is influenced or not by human activities.

The semi-arid Chaco region currently includes more than seven protected areas, but each one is too small on its own to protect a viable and secure population of Jaguars. This string of protected areas in the region has been identified by Argentine conservation and natural resource management organizations as the basis for a future Chaco Green Corridor. This corridor is currently being designed and implemented, and could possibly harbor an ecologically viable population of jaguars. Therefore the need is urgent for current and precise information on the distribution of jaguars and pumas in the region, in order to determine priority conservation areas, and to strengthen existing proposals for biological corridors to connect the protected areas, as well as environmental education and extension programs for corridor and protected area conservation.

To date the only conservation actions undertaken in the region are limited to brief studies that have not been continued. In 2006 two workshops were held to develop the Jaguar Management Plan at the national and Chaco regional scale respectively. We was invited to both workshops, and participated as one of the few researchers working with cats in the Argentine Chaco. Representatives of government and non-governmental organizations responsible for jaguar conservation in the country also participated, and one of the priority recommendations was to promote further research on jaguars in the semi-arid Chaco.

Our research provides the first estimate of population density for jaguar and puma in the Argentine Chaco. . Only in two of the three sites surveyed we recorded the presence of jaguars (Aboriginal Reserve in central site and Formosa in the north site). The records were limited to tracks on trails, corresponding to one individual at each site. The finding of so few traces and the absence of photographs in camera traps despite the large sampling effort carried out (between 1096 and 1820 days camera at each site), warns that the species is present at very low density in the region. In the case of the puma we obtained many photographs of the species in the three study sites, and recorded tracks on virtually all trails at each site. Early estimates of population density made for pumas (we have processed only data from the first site, the Aboriginal Reserve) indicate a low density compared to that estimated for other similar environments in other countries. We recorded a total of 23 species of mammals in the camera traps and 23 species with the line transect surveys, for a combined total across both methods of 26 different species for the region.

We conducted dissemination work in rural schools and with local rangers, explaining the importance of both felids, their prey species and the ecosystem. We also distribute educational material. The results of this study suggest that the priorities for conservation and management measures for the jaguar in the Argentine Chaco must be changed, because populations are in serious danger of extinction in the region, contrary to what was believed just a few years ago. With this research we have maintained three years of continuity in monitoring populations of jaguar, puma and other medium and large mammals. This is of particular importance because it is a region where there were virtually no previous population studies of mammals and where no other research group is currently studying these taxa. Finally, we were able to alert the government and nongovernmental organizations with influence in the management of species and the region about the urgency of the creation of new reserves in the area and developing a management plan for the jaguar and puma in the Chaco.