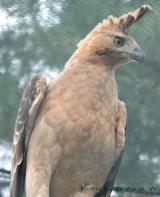 Salak Mountain is including in Gunung Halimun Salak NP area. This is one of the largest national parks with tropical rain forest in Java with coverage 113,357 Hectares. The area has high biodiversities and important as habitat for many species plant and animals. This area also has important role as water catchments area for Jakarta and surrounds. One of the animals that can found in Salak Mountain is Javan Hawk Eagle. This bird is endemic in Java and include in endangered species in IUCN list. Indonesia government also protects this bird by law and decided this bird as national symbol. In the nature, this bird very useful to identify environments condition because it's depending on natural forest existence in Java. One of the latest habitats is Salak Mountain. The main threat of this bird is illegal hunting and habitat loss. It's caused by exhortation of human population and less of law awareness and law enforcement. Illegal logging and the change of land uses is the biggest threat of the habitat, and many people keep this bird in they house as a pet. The objectives of this project are:

1. To collect data about population and distribution of Javan hawk eagle and other species in the study area.

2. To increase a public awareness and involvement on conservation effort of raptor and its habitat