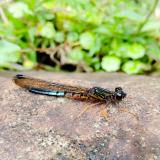 This project proposes research and conservation of habitats critical for the survival of the rare, endemic and critically endangered Kenya’s montane dancing-jewel (Platycypha amboniensis) in central highlands of Kenya with an ultimate goal of improving its conservation status. The species has a limited area of occurrence with few patchy populations confirmed in its known range. There are small populations in the streams heading south from Mount Kenya forest. We have observed that water abstraction from these streams (and probably siltation) affects the population by reducing water speed, surface area and thereby affecting larval emergence. This project will build a relationship between the montane dancing-jewel and local community water users through education and capacity building. This project follows a community based approach in research and monitoring, environmental education and evidence based ecosystem restoration.