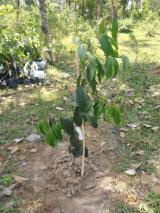 Reintroduction is a potentially important tool for rare and threatened plant conservation. The aim is to increase survival prospect and prevent the extinction of a plant species through establishment of new or augmentation of existing populations. Concerning Kokoleceran (Vatica bantamensis) and Cerelang Laut (Heritiera percoriacea), a reintroduction program has been conducted in 2014 to help both species survive against habitat loss and illegal logging. Based on autecological study previously conducted, Javan Rhino Study and Conservation Area (JRSCA) in Ujung Kulon National Park (UKNP) was selected as reintroduction site of the species. A total of 100 seedling of Kokoleceran and 50 seedlings of Cerelang Laut was planted at the site using enrichment planting method. The current condition of the seedlings and the effectiveness of the reintroduction method used, however, are unknown since there are no monitoring activity until now. Thus in the present project we will assess the survival rate of the transplants and evaluate the reintroduction methodology applied. The project will provide the current status of these endangered endemic trees in UKNP and may become a model for the reintroduction program of other plant species.