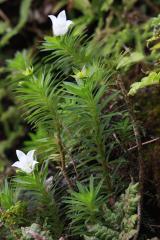 The large bellflower, Wahlenbergia linifolia (Roxb.) A. DC. (Campanulaceae), is endemic to the remote South Atlantic island of St Helena. Due to the island's extreme isolation and moist, tropical climate, it has evolved a unique flora and fauna of global importance, with 45 endemic flowering plants and ferns which include 9 endemic genera. Today, the cloud forest zone still clings-on to the very summits of the central ridge although little more than 60 Ha remain. It forms a diverse ecosystem still rich in endemic plants and invertebrates and is critical to the sustainability of the island’s human population for its value in rain water retention and potential for tourism. Fragmentation of populations and large scale invasion by non-native invasive species are on-going threats to the integrity of the habitat, and many of the native species are extremely endangered.

One of the most charismatic endemic vascular plants of this zone, the large bellflower, is currently the most at risk. It was scheduled on the IUCN red list as critically endangered (B2ab(ii,iii,iv,v); C2a(i); D ) in 2003, and since then its status has deteriorated further. Of the 3 populations then known, probably only one survives, at High Peak. Part of the reason for decline is that the remaining sites are located on areas of moderately bare, unstable cliff face, which are prone to both invasion of the germination micro-habitats by invasive species and periodic landslips which can be locally catastrophic. More insidiously, the species is believed to hybridise with a closely-related but more widespread endemic species, the small bellflower, Wahlenbergia aungustifolia (Roxb.) A. DC., and it is probable that many of the individuals at the site, other than a core population of 20-30 plants, are no longer genetically pure.

The reasons for the alarming decline in the large bellflower are unclear, but a sharp decline in the area of mature tree fern thicket and forest in the early twentieth century is likely to have been the major factor. Nineteenth century accounts indicate that it was then a very local but much more common part of the cloud forest community, where it often grew epiphytically on trunks of tree ferns and cabbage trees. The small bellflower is generally a species of lower altitudes but a little overlap may always have permitted some interspecific gene flow. The current escalation in the hybridisation problem may be a consequence of the extreme rarity of large bellflower today. The small size of the population ensures that any crossed pollen is much more likely to come from the more abundant small bellflower.

The ultimate aim of our project is to prevent the immediate extinction of the large bellflower. In order to achieve this, several steps are necessary:

(1)      The extant site must be weeded of invasive species and taller natives in order to prevent further deterioration of the germination microhabitats.

(2)      The extent of hydribisation must be assessed, to determine which of the surviving individuals are genetically pure.

(3)      The pollination biology of the species must be better understood, to assess the best means of preventing further cross-pollination.

(4)      A stable ex situ population of pure individuals must be established in the island’s conservation nursery, which will serve as a failsafe against further deterioration and provide a stock of plants for reintroduction.

Visits to all of the recently documented micro-locations for large bellflower are currently under way. Leaf samples are being collected from all plants found, and these are being sent to the University of British Columbia, Canada, where Professor Quentin Cronk is conducting genetic analyses on them. It is hoped that these analyses will enable us to identify which plants are genetically pure, so that an ex situ cultivation programme can commence. The results will also enable us to assess the frequency and patterns of hybridisation within the population, which will better inform the future management of the problem. A species action plan will be produced from the findings, which will outline the steps necessary to reintroduce pure large bellflowers to a range of sites across the uplands of St Helena.