In search of the long-lost Largetooth Sawfish 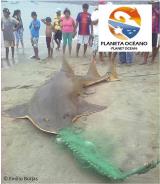 The Largetooth Sawfish is a large, euryhaline, tropical species, occurring in freshwater, marine and estuarine environments. Its status in the Eastern Pacific is poorly understood, but it's thought to have disappeared from a large part of its former range. It may now be extinct in many countries, leading to a significant contraction of its extent of occurrence. Threats (bycatch, mangrove loss) are ongoing throughout this region, so any remnant populations are likely still in decline, especially as it's characterized by slow growth, late maturity, and low fecundity.

In Peru, P. pristis was thought to be extinct for >20 years. However, in January 2014, one of our team's ‘citizen scientists' documented the incidental capture of one individual in the Tumbes artisanal gillnet fishery. This inspired a window for action: as there are poorly-studied areas with suitable sawfish habitat, targeted surveys are required to locate remnant populations. In addition, this species' migratory nature can serve as a flagship for regional marine and mangrove conservation.

This project aims to assess the occurrence of Pristis pristis in Peru and the Eastern-Pacific, while building regional collaboration for this species' conservation.

Project objectives are:
1. Assess present occurrence of Largetooth Sawfish in northern Peru and in suitable sawfish habitats of the Eastern-Pacific.
2. Increase knowledge on the conservation status of sawfish among artisanal fishermen, local authorities and students in northern Peru and the Eastern-Pacific, promoting the formation of a community reporting system for sawfish sightings.

We'll develop surveys to artisanal fishermen and community leaders at coastal and mangrove-adjacent communities in northern Peru. In addition, by establishing partnerships with other regional non-profits, we'll be able to expand these surveys along the East Pacific. In the event of encountering sawfish rostra, morphometric measurements, tissue samples and photographs will be collected. In Peru, surveys on sawfish trade will also be conducted among the cock fighting industry, which is said to import sawfish teeth to manufacture artificial spurs. We'll additionally host awareness workshops at local schools and fishermen associations, and meetings with local authorities and resource managers. Posters, calling for the community to report sawfish sightings, will be widely distributed, and shared throughout the Eastern Pacific region.