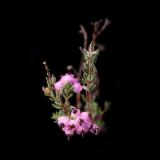 The Kenilworth Heath (Erica turgida) is a narrow endemic from the lowlands of Cape Town, South Africa. No wild populations exist due to urban development. Two ex situ collections remain: one made in the 1970s, and another repariated from Vienna - likely collected in the late 1700s by colonial botanists.

The goal of this project is to reintroduce the extinct in the wild Erica turgida to the Rondebosch Common conservation area over two years. This will be done by restoring the plant community to 80-90% of expected species- including 7 associated, threatened plant species. The introduced Ericas will be various combinations of the seed grown as well as the historical clones.

The objectives are to:

4. Assess the suitablility of further receptor sites for Erica turgida.