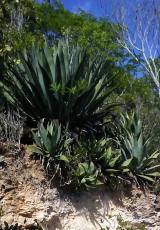 Agave is one of the genera of succulent plants most threatened by the use of its leaves in the production of textile fibers, alcoholic beverages, honey, cellulose, medicines or phytosanitary products (Amarilla et al., 2000, Otero, 2005). Worldwide, the overexploitation for commercial purposes of their species, often not subject to management plans, affects the degradation of their habitats and conditions their vulnerability.
In Cuba, the genus is composed of 24 species, most of them threatened (Greuter and Rankin, 2016). Despite efforts to conserve these species, agaves continue to be very threatened species. This may be due to the little information that is available about their adaptive capacity, in particular about reproductive biology and the population structure of the species to be conserved.
Agave grisea is an endemic species of the coastal sector Perche-Caletón de Don Bruno, Cienfuegos. Since its description in 1913 has been little studied to be an exclusive species of this area. Studies on their population structure have been insufficient, since they have only been based on their morphological description and characterization of population size and extension of presence (Álvarez 1996). These studies indicate that the species suffers reduction of the area of occupation and extension of presence, low quality of habitat, severely fragmented and continuous decrease in the number of mature individuals. According to these criteria, it is categorized as Critically Endangered (CR) according to the Red List of Flora of Cuba (Gonzalez-Torres et al., 2016). The extraction of its leaves for use in domestic washing is reported as the main threat to this species (Álvarez 1996). Aspects of the population dynamics of Agave grisea are unknown as the particularities of reproductive biology focused on the ecology of pollination, the structure and distribution of the population, occupation area occupied by individuals and the effect of climate change on the rise of the population. The study of these aspects would allow the clarification of its implication on the conservation status of the species.
The study of the dynamics of a population is important to establish efficient conservation strategies. By analyzing the structure and distribution of the population under study, the influence of demographic parameters on conservation could be known. A very useful tool for this purpose in the population of A. grisea is the use of life tables and survival curves. Knowing the spatial distribution pattern in the population would allow to determine if there is spatial aggregation of the individuals in the different classes of state and if these are related to competitive interactions. The distributions play a fundamental role in the maintenance of the structure, functioning and dynamics of the populations and ecosystems to be conserved.
In turn, the study of the reproductive biology of A. grisea could provide valuable information on how its adaptive capacity has evolved. The characterization of its floral biology will allow to infer the pollination syndromes and the possible pollinators that guarantee the genetic flow within the population
The results of this research would answer questions about ecological elements of the population dynamics of Agave grisea in south-central Cuba and provide elements for establishing in situ management and conservation programs for the species and for
sensitize people from local communities and local wildlife conservation authorities on the importance of Agave grisea as a target species for conservation. The work with the community will be based on the sowing and reintroduction of the species in its habitat for the strengthening of the population and the sustainable use of its leaves.
Taking into account the mentioned aspects, the objectives of this project are: