Habitat sustainability and local culture perspective for the future of the mentawai langur in Siberut Island, West Sumatra Indonesia. 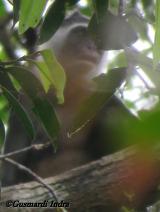 Indonesia has a threatened endemic species many as 115 species (IUCN Redlist, 2016). One of them is Presbytis potenziani in Mentawai Island. This species has two sub species, First Presbytis potenziani potenziani located in Sipora, South Pagai and North Pagai, Second is Presbytis potenziani siberu located only in Siberut (Roos, C., Boonratana, R., Supriatna, J., Fellowes, J. R., Groves, C. P., Nash, S. D., Rylands, A. B., dan Mittermeier, R. A.,2014). This vername of threatened endemic primate in Mentawai is Joja, Atapeipei and Bajet.Viewed from customs and local knowledge of the community mentawai these animals used as food and dishes for certain ceremonies. But at the time are now many people who started to reduce to consume these endangered animals. Moreover in many areas to hunt these animals are also used as a hobby. Leaf-eating primates of this class in addition to having a beautiful body color is also a monogamous animal.

The need to keep these animals due to the population of these animals is declining beginning in 1980 the population of Presbytis potenziani According to the WWF report (1980), Joja population is estimated at 63,000 individuals spread in the Mentawai Islands. Over time and losing habitat for Joja such as hunting and deforestation, resulting in Presbytis potenziani population decreased almost by 43% within 25 years. And in Siberut alone is estimated only about 1600-9500 individuals (Whittaker, 2006). Joja endangered due to habitat area is reduced and the hunting is done by the Society. At this time Presbytis potenziani highly protected by International Union for Conservation of Nature is Endangered Species. Appendix I of the list located on the site of the Convention on International Trade in Endangered Species (CITES). Presbytis potenzianiincluding endemic species protected by law  No. 5 in 1990. In addition to legislation Joja also protected by ministerial decree dated June 10, 1991, No. 301 / Kpts-II / 199.