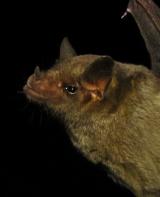 The Mexican long-nosed bat (Leptonycteris nivalis, Phyllostomidae) is a migratory species distributed from central Mexico to the southwestern United States, occurring in pine-oak and deciduous forest, and desert scrub. Currently, this bat is listed as endangered in the United States and Mexico and globally by the International Union for the Conservation of Nature (IUCN Red List), due to declines in populations of over 50% in the past 10 years.
Mexican long-nosed bats are specialized to feed on nectar and pollen. They migrate north starting in late spring following the blooms of century plants. The pollination systems in century plants (Agave spp.) are adapted to produce higher levels of nectar at night favoring nocturnal flower visitors. Mexican long-nosed bats ensure cross-pollination in century plants enhancing the genetic diversity of these plants and eventually increasing their resilience to environmental stress. Century plants play a critical role in maintaining soil stability in arid and semi-arid ecosystems. Moreover, these plants have socio-economic value because historically they have provided food and cultural services for humans in the form of natural fibers, and traditional beverages such as tequila and mescal.
The migration of the Mexican long-nosed bat is considered an "endangered phenomenon" because of its complexity. Only maternity colonies have been found in the northern part of its range. Additional evidence from genetic analysis suggests that all reproductive females migrate north during the spring and summer months as a single, loosely formed colony. According to this evidence, the Mexican long-nosed bat is extremely vulnerable to disturbance at any of the roost and foraging sites in its northern range.
The ecosystems in the northern range region have suffered high levels of degradation due to the conversion of land to agricultural use and livestock activities. Recent severe droughts strongly affected northern Mexico and southwestern US regions. The absence of rain has delayed the blooming events of the century plants. Furthermore, the drought has aggravated the presence of intense fires extending into large areas of the Mexican long-nosed bat habitat.
Our project focuses on this northern region, which includes the states of Coahuila and Nuevo Leon in Mexico and Texas in the United States. We will identify critical foraging and roosting sites to prioritize conservation actions that will help the recovery of Mexican long-nosed bat population and the maintenance of the pollination services it provides to key plants in arid ecosystems.
With support from the Mohammed bin Zayed species conservation fund we are using computer modeling techniques and field assessments to evaluate the availability of foraging and roosting sites, and identify the condition and threats to these sites. The results of this project will help to develop a conservation plan for the Mexican long-nosed bat in collaboration with local communities and state and national governments.