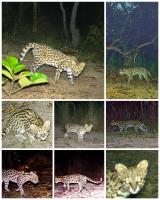 The project intends to monitor the population of northern tiger cats in Mirador State Park (Maranhão State, Northeast Brazil) and to mitigate threats, through conservation actions. The monitoring is intended at both the species (camera trapping) and habitat levels (GIS image analysis) and will involve several stages to cover the entire area, one phase per year, the first around Mel and Cágados outposts. The conservation actions will include the evaluation of domestic carnivores as infectious diseases reservoirs and a subsequent vaccination program to avoid further problems. These actions were chosen based on a previous environmental evaluation conducted in the area. Additionally, the project will evaluate the local human perception towards felids and reestablish an environmental education program. Furthermore, the data to be gathered on population changes/fluctuations is intended to provide support for future status assessments for the IUCN, as well as to the Brazilian environmental agencies, both at state and national levels. It is also the intent, through the actions to be deployed, to train and involve a new generation of professionals specialized in conservation actions, which are badly need in the state of Maranhão. Overall we expect the project to enhance protections in the park, using the northern tiger cat as a flagship species, and protecting a wide array of other species.