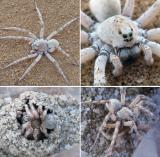 Ocyale ghost is a large, striking wolf- spider endemic to the North- Western Boeny region of Madagascar (near Mahajanga). Recently described by Dr. Merlijn Jocque from the Royal Belgian Institute of Natural Sciences. The species is currently known from only around a single small lake, and the population could be less than thirty mature individuals at this site. The species is highly habitat specific, making shallow burrows in its fine white sandy habitat. A night- active predator, it is conspicuous and detection is as close to guaranteed if present at other sites.

This project aims to:

A) Locate any additional populations of Ocyale ghost in the region

C) Use mark- release recapture if other populations are found, in order to estimate metapopulation and individual population sizes,

Working alongside three local MSc and BSc students from Mahajanga University, we hope to uncover this species status. The dispersal capability of spiderlings is essentially the question here, and some small sandy patches are present around five kilometres away from the known population. The colouration of this species essentially divides the region up into chunks of inhospitable habitat and small islands of potentially suitable habitat. Ultimately, this project aims to provide a baseline on the ecology and populations of this species in order to inform it's status on the IUCN red list.