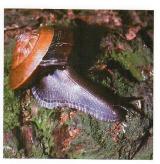 Endemic snails were once abundant throughout Mauritius. Habitat destruction and the introduction of exotic species, mainly rats, tenrecs and toads, have significantly led to a reduction in the abundance and distribution of endemic snail populations. Of 81 known endemic Mauritian species of land snail, 36 species are extinct and most of the remaining endemic species are threatened with extinction.

As the occurrence of the Pachystyla bicolor snail is so low, snails were collected from the wild, captive bred off site at La Vanille Nature Reserve in especially built outdoor enclosures. From four adults collected in the wild, we were able to captive breed more than 300 Pachystyla bicolor. The offspring were head started at La Vanille and when they reached adulthood, 50 individuals were released in a fenced predator free area at Vallee de L’Est. To reduce the impact of predators, we built a 5 m x 5 m (25 m², with a 1m high fence) predator proof fence in an area of good quality native forest, favoured by the snail species. Toads and tenrecs were trapped and removed and the fence prevented their reinvasion. Five toad and tenrecs pitfall traps within the fenced area captured any remaining or potentially invading animals. Nine A24 Goodnature traps were placed in a grid at 25 m intervals around the fenced area to control rodents. This was effective at reducing the number of rats. Habitat features, such as logs, leaves, stones and litter, favoured by snails were added to the area. Fifty adult snails were released in the enclosure. After 3 months only 2 snails had died. The cause of death is unclear. All found snails were measured and weighed. After 3 months, the average weight of the snails had increased from 5.15 g to 7.02 g and average size increased from 29.51 mm to 32.39 mm in diameter. We have not observed any breeding yet, but expect to soon. The captive-bred population at La Vanille will be maintained as an insurance colony that can be used to reinforce populations elsewhere.