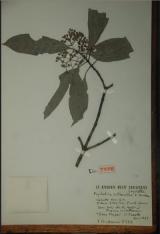 All three species included in this project are assessed as Critically Endangered on the IUCN Red List, due to their populations of fewer than 50 individuals. Trilepisium gymnandrum is known from 6 small populations each about 500m apart, and currently only juvenile individuals are known. In the late 1980s, two or three mature individuals were known, but without coordinates and the individuals have not been located since then. Psychotria silhouettae is endemic to a single ravine on Silhouette. The species has not been red listed since 2007, when six individuals were thought to be remaining. The assessment itself suggests that more extensive surveys are needed to determine if these are the only remaining individuals of this species. However, there is no more recent data from the last 10 years to confirm the species is still present on Silhouette. Impatiens gordonii populations have reduced from 5 distinct populations to 2 in a century, and the species is now suspected to remain in only one population, which may have fewer than 50 individuals.

What are we doing?

GTC is working with the Island Conservation Society and biodiversity consultant Bruno Senterre to carry out field surveys for Psychotria silhouettae, Impatiens gordonii and Trilepisium gymnandrum to update and to add to the knowledge of the conservation status of these species.

During the first of two fieldtrips, the survey team identified only a single mature individual of Trilepsium gymnandrum remaining in the wild. This can be considered as a rediscovery as the species had not been seen adult since about 30 years, although it had been actively searched for during the last decade. The whole difficulty is to spot the plant considering that at adult stage the leaves are in the canopy and the main character available to stop and initiate identification (search for the leaves) is the trunk and its abundant white soap. They also found a population of the herb species Impatiens gordonii in the area. The trip highlighted the need for more taxonomic work on the Psychotria species, as intermediate specimens were found between P. silhouettae and P. pervillei.

Another fieldtrip will take place in early 2018.