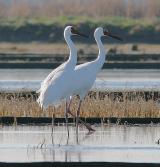 The critically endangered Siberian Crane is considered to be the most threatened of the world’s 15 species of cranes. Although significant progress has been made to protect and manage Siberian Cranes, hunting is believed to be the primary cause for the decline of Siberian Cranes in Central Asia. Although there are laws prohibiting hunting in all range countries, illegal hunting is still reported. Enforcement is difficult in many remote regions used by the cranes. Therefore, it is crucial to focus on education promoting voluntary concern and support from hunters.

To respond to these issues, the International Crane Foundation (ICF) administered a grant provided by the Mohamed bin Zayed Species Conservation Fund (MBZ SCF) to the governmental and non-governmental organizations in four Central Asian countries.

The wetlands used by the Siberian Crane have global significance for biodiversity according to both the Convention on Biological Diversity and the Ramsar Convention on Wetlands of International Importance. Three of four involved countries nominated key wetlands to Western/Central Asian Site Network for Siberian Cranes and Other Waterbirds (WCASN) established under the Convention of Migratory Species. Along with the Siberian Crane, the other crane species, such as Eurasian and Demoiselle Cranes, as well as 27 threatened waterbird species use these wetlands during season migrations.

The primary objective of the project is to promote widespread public education, especially to hunters in Afghanistan, Kazakhstan, Turkmenistan, and Uzbekistan along the Siberian Crane Central Flyway which goes from Russia to India.

Training sessions for hunters, game keepers, local people, regional and local administration, inspectors of regional and local departments, representatives of non-governmental nature conservation organizations, mentors and students helped to explain the status and threats to the Siberian Crane; to show international importance of key sites as Ramsar territories and WCASN sites used by Siberian Cranes and other waterbirds; to promote change in the behavior of hunters, border guards, and local people; and to involve them in crane and wetland conservation.

Presentations at the training sessions as well as dissemination of education and information materials during trainings and filed work (brochures, posters, calendars) enabled hunters to correctly identify the Siberian Crane. This should reduce the death rate due to mis-identification.

Improved understanding inspired more hunters to appreciate and care about the Siberian Cranes and its habitats and to make choices to help protect this species and its ecosystems. Through the activities and outputs described in the country section, the project established a good foundation and made important progress toward achieving our targeted long-term outcomes including:

·         Relationships between scientists, nature conservationists and hunters were established or further strengthened.

·         Changes in attitudes and behaviors of hunters and local communities brought about through the initial phase of this study were assessed by interviews with hunters and distribution of a questionnaire among hunting societies and private hunting farms.

·         Gaps in the project workplans were identified through analyses of returned questionnaires.

·         Project implementation has been expanding to additional areas by involving new sites designated for the WCASN or that have potential to be designated. Important new sites were also discovered.

·         Through development of country specific education and information materials, hunters learned more about the current low level of protection of cranes and their habitats; more hunters made decisions to avoid hunting cranes, were motivated to report sightings, and knew where to send reports.

·         A monitoring network that integrates work of scientists and managers with hunters, students, governmental agencies, frontier guards, and other community groups is being established or strengthened.

·        With hunter participation, baseline information is being collected on potential sites to support their future nomination for WCASN.