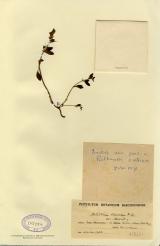 Antirrhinum (Scrophulariaeae) is a western Mediterranean genus comprising 25 species, with the Iberian Peninsula as the main center of diversification of species. Antirrhinum species are perennial plants with showy, pink, withish or yellow flowers that are mainly pollinated by bees. Approximately half of the species of the genus are rare plants that live in rocky habitats. Antirrhinum martenii  and A. valentinum are two of these rare species, considered threatened, according to the IUCN categories.

A. martenii was discovered by a german entomologist, Dr. W. Marten, at he Talassemtame National  Park (Morocco) in 1954, while he was collecting butterflies in the mountains of the Rif region. This species was described a year later as Antirrhinum valentinum subsp. martenii (currently recognized as A. martenii), and since then, although this area has been explored in several botanical expeditions, this species has not been found in the territory. Currently, A. martenii is the only species of the genus Antirrhinum with not known natural populations.

The aims of our project  are: to conduct exhaustive search in the distribution range of A. martenii and A. valentinum; to analysis the genetic diversity of A. populations; and toassess the conservation status of both species.