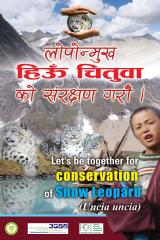 Dolpa is the transition zone between Tibetan plateau and the Himalayan which represents the vast and unique Himalayan ecosystem with transhumance pastoral system, which harbors magnificent herbivores such as Blue sheep, serves the quite unique habitat for the Snow leopard (Uncia uncia) -also known as "Mountain Ghost", one of the most exotic and elusive "big cat" species known to human beings. Snow Leopard is commonly found at elevations between 3000-4500m. Mostly the snow covered area is its habitat .Snow leopards are distributed in great heights extending over the Trans Himalayan region. In world it is reported in different twelve countries like China, India, Kazakhstan, Kyrgyzstan, Mongolia, Myanmar, Nepal, Pakistan, Russia, Tajikistan, and Uzbekistan. In Nepal snow leopards are found in eight protected areas.

Dolpa is geographically divided into two regions: Upper and Lower Dolpa. The highland area of Dolpa region is famous for snow leopard and its prey species-the blue sheep. It is recorded that Dolpa has the highest density (10-12 Snow leopards per 100 sq.km) through the snow leopard's range which is maintained by the presence of rugged terrain such as steep slopes with bluffs, ridges broken by outcrops, and valleys interrupted by cliffs, with arid and semi-arid shrub land, grassland, or steppe vegetation. Every copes and corners of the high mountain of Dolpa are flourished with the roaring of the mountain ghost-Snow leopard.

The number of snow leopard is declining because of habitat degradation and fragmentation, reduction in natural prey due to illegal hunting as well as competition with livestock, retaliatory killing of snow leopard, lack of awareness and lack of trans-boundary efforts.  Youth for Nature (YFN) local NGO from Dolpa is working for conservation of these endangered species through funding of MBZ. The objectives of this project are to actively engage upland communities as stewards for the snow leopard, its prey and habitat, provide veterinary training to local livestocks herders and create conservation awareness on local people.