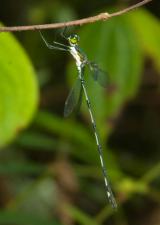 Sinhalestes orientalis (Sri Lanka Emerald Spreadwing) is a globally Critically Endangered damselfly species endemic to Sri Lankan montane zone. It is the sole representative of its genus making it a unique species among other odonates. Sinhalestes orientalis was re-dicscovered in 2012 after an absence of any records for over 150 years. So far it is known from several localities in and at the vicinity of Peak Wilderness Sanctuary which is a part of the Central Highlands of Sri Lanka UNESCO World Heritage Site. It is known to inhabit montane and sub-montane streams and these habitats are limited in geographic coverage and are under increasing pressure from anthropogenic activities. This project is the first research and conservation project targeting this enigmatic species. Main objectives of the project are as follows.

To investigate the habitat requirements and preferences of Sinhalestes orientalis

To investigate the flight seasons and natural history of S. orientalis.

To map and model the current distribution of S. orientalis in the island and to provide data for a better conservation assessment of the species.

To increase the awareness regarding the target species and its habitat.

The information gathered during the project will be disseminated among the scientific and professional community, relevant governmental authorities and general public through research articles, reports and educational materials. Recommendations for the conservation of the target species and its habitats based on the research results will also be proposed to the relevant authorities.