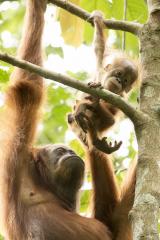 Amongst other efforts to conserve the Critically Endangered Sumatran orangutan of Indonesia, one tool is the establishment of genetically-viable, self-sustaining populations via the reintroduction of rehabilitant ex-captives or translocated wild individuals. These new populations serve as a ‘safety net' should catastrophe befall the remaining naturally occurring wild Sumatran orangutans. Two populations are now being established in large, protected forest blocks, Bukit Tigapuluh National Park in Jambi province, and Jantho Pine Forest Nature Reserve (hereafter referred to as Jantho) in Aceh province.

Since 2011, SOCP has reintroduced 100 orangutans into the Jantho Nature Reserve (note this designation is the highest protection status possible for conservation areas under Indonesian Law, above that of a National Park). Several detailed and comprehensive surveys carried out between 1990-2009 determined Jantho to be exceptional orangutan habitat, with a particularly rich forest sufficient to support at least 300-500 individuals. However, since Jantho is connected to and within the wider forest blocks of both the world-renowned Ulu Masen and Leuser Ecosystems, a near limitless carrying capacity is possible. A further 52 orangutans are currently housed at SOCP's Orangutan Quarantine Centre, progressing through socialization training until they are also ready for release in Jantho. In the January 2018-January 2019 period, we plan to reintroduce 15 more orangutans into Jantho.