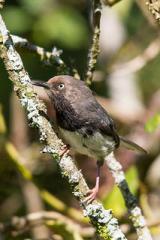 Taita Apalis (Apalis fuscigularis) and Taita Thrush (Turdus helleri) are critically endangered birds endemic to Taita Hills and are both threatened with extinction due to their continued population decline. (Birdlife international, 2016) A. fuscigularis is one of the rarest birds in the world and has undergone a massive population decline over the last 14 years where the number went down from estimated 1200 to less than 600 from the year 2001 to 2010 (Borghesio et al, 2010) more recent survey undertaken from the year 2014 revealed further catastrophic decline with the number going down to less than 200 individuals that make the current global population (Borghesio et al unpl). A. fuscigularis initially occurred in 9 forest fragments and currently occurs in small subpopulation confined in only 4 forest fragments of the Taita Hills (Vuria, Msidunyi, Ngangao and Yale) with Yale fragment hosting just a pair. T. Helleri on the other hand has a current population of about 1,000 which is relatively stable as compared to that of T. fuscigularis but only restricted to three forest fragments (Mbololo, Ngangao and Chawia) with less than 10 individual remaining in Chawia fragment

Taita Hills are in south-eastern Kenya (3Ëš25’S, 38Ëš20’E) and covers an area of about 250km². The Hills form the North-most part of eastern Arc Mountains, one of the 34 global biodiversity hotspots. Taita Hills has lost about 98% of its natural forest to settlements and to date only small remnants of forests remains which are heavily fragmented. Our consistent demographic surveys show that habitat, Climate change and low breeding success are all interacting major causes of the A. fuscigularis and T. helleri sharp population decline. These factors are all influenced by extreme loss of habitat and fragmentation. The breeding success was found to be very low and nesting in Ngangao forest fragment virtually occurred in Northern part (Wagura et al, 2012). Unfortunately, there are several patches of exotic species that consume a huge area within the natural forest that provide nesting site in Northern Ngangao. It is therefore critical to convert these exotic species patches into natural forest to expand Habitats and breeding sites in order to elevate breeding success for the two target species.

Our work therefore targeted one of the biggest plantation patches that form part of northern Ngangao and which had previously caught fire. The area was dominated by exotic pinus patula which seeds sprouted into thick bushes after the fire. With the involvement of the local community and Kenya Forest Service (KFS) who are the forests custodian, the Mohamed bin Zayed fund supported the clearing of approximately 14ha of exotic pines to allow for natural regeneration of the native species. The work aimed at achieving a 10% increase of natural forest in Ngangao to expand the breeding sites for the two target species. Community awareness was also conducted in the area. Survey plots were established at the cleared site and we are currently monitoring the progress. A. fuscigularis, which prefers more open, natural gaps in the forest (Wagura et al, 2012) and T. helleri, which usually favours later stages of forest regrowth, will certainly colonise the gaps in the near future. This work has attracted some more funding that has allowed us to continue with site maintenance, follow up survey, community awareness and conversion of more sites into natural forest in Ngangao and Yale forest fragment.