Back from the brink? The future of the Brazilian Guarajuba tree, declared Extinct in the Wild (EW) but recently rediscovered 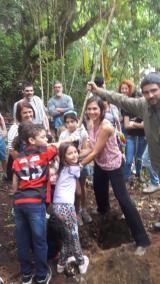 The project focuses on its rediscovery in the wild, declared extinct in 1998 as it had not been seen in its natural habiat since 1942. The rediscovery of this enigmatic timber tree, prompted many questions which can only be addressed with sound scientific evidence.

- What is the current size of the extant population?

- How its age/ size structure is formed nowadays?

- What is the effect of the severe observed historical fragmentation of its habitat, which originally formed a continuous cover of Atlantic Rainforest?

We have already completed a 15-day expedition in Rio de Janeiro between March and April, 2016 (flowering and fruiting season). Quantitative data on population number, and size of each individual were gathered along with size leaf tissue from each individual for further investigation of the population genetic diversity and structure. During June and July 2016, DNA extractions and genetic analysis of the leaf tissue collections were undertaken at RBG Kew’s Jodrell Laboratory. Analysis of these results will help us to quantify genetic diversity and differentiation within and among sub-populations. Such data represent a significant source of evidence in the development of effective conservation strategies based on comprehensive and reliable extinction risk assessments.

Moreover, declaring the “guarajuba” to be extinct highlights its status as a putative ‘’living dead”: its population is not expected to thrive in its remaining habitat without urgent and significant human intervention. The known wild specimens are restricted to a small geographic range, and the population has suffered decline due to decades of selective logging and habitat loss. Although long-lived trees such as T. acuminata are, a priori, relatively more resistant to the effects of fragmentation, the impacts of depletion of its habitat may affects its breeding pattern, reproductive output and progeny fitness, directly compromising population viability. We hope that scientifically robust answers for all these questions will support the foundations of a feasible participatory conservation action plan to save it from the verge of extinction.