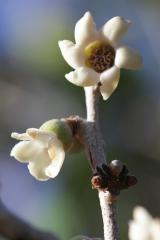 Our vision for Round Island is to restore a healthy and diverse plant ecosystem which supports the reintroduction of other threatened endemic species on the island. A priority is to restore native hardwood forest communities, as these were known to serve an important functional purpose for Round Island's ecology. In this project we have focused on four priority threatened plant species, including our focal species D. egrettarum. Our long-term goal for D. egrettarum is to reduce extinction risk by successfully establishing a sub-population on Round Island, where it was known to occur until the late 1800s. We have succeeded in planting 86 individuals thus far, with over 400 individuals in the nursery, which should be ready for the forthcoming planting season. We have also succeeded in mapping all historically planted trees on the island, dating back over 20 years. This will provide a vital baseline for long-term monitoring, and, by assessing the performances of different species relative to the conditions at their planting sites, it has already been invaluable in guiding efforts to improve long-term survival. Finally, we have created a detailed habitat map of Round Island, to enable us to better identify future suitable planting areas for the future. As a biproduct of these outputs, we have been able to identify a wide-ranging package of recommendations for future management of the island, addressing not only restoration goals but also highlighting invasive species issues and the conservation of threatened native flora.