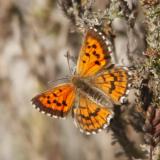 The Strandveld Daisy Copper (Chrysoritis dicksoni) is a range-restricted, endemic, Critically Endangered butterfly species in the Western Cape province of the Republic of South Africa.

The historical population around Melkbosstrand is believed to be extinct, observed for the last time in the 1990's. A population discovered by Ernest Pringle in 1980's occurs just north of the village of Witsand, with a disconcerting 95% of the total remaining population occuring in a single locality.

The Endangered Wildlife Trust, in partnership with the Lepidopterist Society of Africa, identified the Chrysoritis dicksoni as a priority species for this project which is funded through the Mohamed bin Zayed Species Conservation Fund.

Threats to this species include alien invasive plant encroachement, overgrazing and too frequent fire regimes. All of these threats are contributing to the steady decline of this species. With these threats highlighted as reasons for the species going extinct in the Melkbosstrand region, this has become a critical focus for the management of the Witsand site going forward and will form part of the Species Management Plan for Crysoritis dicksoni and this property. To this end we needed to find a mechanism to capture the invasive alien plant distribution on the site to strategically plan for the implementation of alien vegetation clearing, as well as long term monitoring of the progress made with clearing interventions. We used UAV technology to map the property, and utilised more than 6000 images to generate an orthomosaic map which was used to create point locality data for more than 1000 alien trees that will be cleared.

An additional 8 butterfly species formed part of this project with the main objectives of i) securing protection for at least one of the target species through protected area expansion, and ii) working with landowners and conservation authorities in sensitizing stakeholders to the importance of butterfly conservation in the Western Cape. This project has seen tangible conservation gains and have given us the opportunity to secure more external funding to further these gains across various butterfly species in the next few years.