A new species of crayfish from Australia, Euastacus binzayedi, is named in honour of the Fund. The species was discovered in 2010 by James Furse and James Coughran of Griffith University in Queensland, Australia. The crayfish was officially described in the Journal of Freshwater Crayfish in February 2013.
This is the second species known to be named after the Fund. In March 2013, the Fund learned of a species of lizard in Peru, Enyalioides binzayedi, discovered by Dr Pablo Venegas from Centro de ornitología y Biodiversidad in Lima, Perú.
According to the report written in the Journal of Freshwater Crayfish (Furse, Dawkins, & Coughran, 2013), the species was “named for His Royal Highness the Crown Prince Mohamed bin Zayed of the United Arab Emirates, in acknowledgement of his substantial contributions to conservation of endangered species, through the Mohamed bin Zayed Species Conservation Fund. The Fund supports conservation initiatives for plants and animals throughout the world…” (p. 107).
The lead author of the paper and recent grant recipient, James Furse, said “The Crayfish Team is really happy to see this paper… finally published. This takes the total number of Euastacus species described to 52, it is quite exciting as these are the first species descriptions ever published in the 40 year history of the Journal Freshwater Crayfish, and of course we are particularly delighted to name a species after His Highness Mohamed bin Zayed.”
The author is currently seeking better photographs of Euastacus binzayedi, but weather has been a significant limiting factor in Lamington National Park in southeast Queensland where it was found at 900 meters above sea level. “I just returned from the field where I was trying to get some really superb images. Sadly I had to cut my trip short due to really dangerous weather conditions. It is not much fun being in a remote mountainous area with giant trees falling over within earshot," exclaimed Dr Furse.
We look forward to the weather clearing and seeing some fine images of this unique species of crayfish. We wish the research team all the best in their continued work on behalf of Australia’s endangered species .
For more information, please see: Furse, J.; Dawkins, K & Coughran, J. (2013). “Two New Species of Euastacus (Decapoda: Parastacidae) from the Gondwana Rainforests of Central Eastern Australia,” Freshwater Crayfish 19(1):103–113. 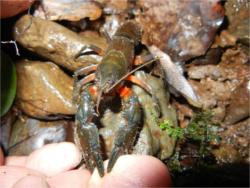