A fish, thought to be extinct, was recently rediscovered in the Western Ghats in India by grant recipient Rajeev Raghavan. “Our very first survey brought us a surprise. We collected a single individual of Hemibagrus punctatus – a species red listed as Critically Endangered and possibly Extinct.”
Mr. Raghavan, a freshwater fish specialist at St. Albert's College in Kochi India, is searching for the Lost Fish of the Western Ghats. With over 290 species, of which 189 are endemic, the freshwater fish fauna of the Western Ghats is one of the richest and unique in the tropical world. It is estimated that 37% of the total freshwater fish species in this area are threatened, all of which, except one, are endemic to this zoogeographic region.
Therefore, it was good news when Mr Raghavan recently reported that his “very first survey brought a surprise. We collected a single individual of Hemibagrus punctatus, one of the target species covered by the MBZ project. The IUCN Red List of Threatened Species considers this species as ‘Critically Endangered’ and possibly Extinct. The second survey at an additional location resulted in the collection of three more individuals thereby confirming that the species although extremely rare, still lives in small pockets in its historic range and is therefore not extinct as previously thought.
He also reports that he collected individuals of a fish which he thinks is Barbodes bovanicus, another species listed as Critically Endangered and possibly extinct. Detailed studies are being carried out to validate the taxonomic status and identity of the specimens.
A website, www.lostfishes.in, is being developed and a Facebook page has also been set up.
The fund wishes Mr Raghavan and his team the best of success in locating and protecting the lost fish of the Western Ghats.
For more information about the project and Mr Ragavan, visit his website at http://crgkerala.academia.edu/RajeevRaghavan 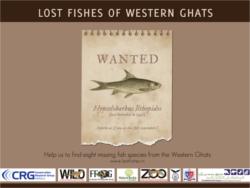