Her Excellency Mrs. Razan Khalifa Al Mubarak appealed to the public to help the Mohamed bin Zayed Species Conservation Fund protect the world’s biodiversity and reverse the global extinction crisis.
In a lecture yesterday evening at the Majlis Mohamed bin Zayed, Mrs. Razan Khalifa Al Mubarak, Managing Director of the Mohamed bin Zayed Species Conservation Fund and Secretary General of the Environment Agency Abu Dhabi, outlined the successes of the MBZ Fund over the last 10 years and demonstrated how the people of Abu Dhabi and the UAE can help end the global biodiversity crisis.
“In less than 10 years of operation at the MBZ Fund, we have demonstrated again and again our global impact on the conservation of species and at the same time the sustainability of our endowment-based funding model. Now it’s time to scale up. We can have an even bigger impact and begin to reverse the extinction crisis. This is now our ambition. To become the acknowledged global leader in this field. To make an even bigger difference for species, for our planet, for the security of our future generations,” said H.E. Mrs. Al Mubarak.
As a man who grow up in the pre-oil era of Abu Dhabi, the late Sheikh Zayed had a close connection and understanding of the value of nature to the well-being of the human spirit. His respect for nature inspired Sheikh Mohamed bin Zayed to establish the MBZ Fund in 2008.
The Mohamed bin Zayed Species Conservation Fund provides micro-philanthropic financial support in the form of small grants up to $25,000 to species conservationists all over the world who engage in what Mrs. Al Mubarak called “Boots-on-the-ground, get-your-hands-dirty conservation projects to save species from extinction.” The MBZ Fund specifically focuses its attention on supporting species conservationists, who the Fund views as the first line of defence against extinction and as important as the nature they set out to protect.
This philosophy of the MBZ Fund is totally unique in the world of species conservation. It recognizes all species, everywhere, as important - not only the biggest, fuzziest, most beautiful and charismatic of species, but all species including fish, insects, plants, birds and even fungi.
Over the last 10 years, the MBZ Fund has supported more than 1,800 species conservation projects in more than 170 different countries with $17,000,000 to help prevent the world’s most endangered species from going extinct. This support has covered than 1,200 different species and subspecies which are thought to be among the most threatened and endangered species globally.
Joining the VIPs of the UAE were four representative recipients of MBZ Fund grants. Marilyn Connell from Australia with support from the MBZ Fund, helped save from extinction the critically endangered Mary River Turtle, otherwise known as the Punk Turtle for the green-coloured algae adorning its head. As well as Caleb Ofori, an amphibian expert from Ghana, has worked to save the Togo slippery frog of which less than 350 individuals are known to still exist.
The MBZ Fund also invited Dmitry Dorofeev from Russia and Oscar Campbell, a chemistry teacher from the British School Al Khubairat here in Abu Dhabi. Last year in January 2017 in Umm Al Quwain, Oscar an avid bird watcher and Chair of the Emirates Bird Records Committee, spotted a leg band fitted to a rare wading bird known as a Great Knot. Oscar tracked the leg band back to the Russian scientist, Dmitry who with a grant from the MBZ Fund, fitted the band to the bird in Kamchatka, Far East Russia, in summer 2016. Dmitry later saw the same bird in Russia - documenting a 20,000 kilometer, twelve-month round-trip migration route from Russia to the UAE and back again.
Her Excellency highlighted the historical relationship of the UAE with conservation and the importance of future engagement with species conservation. “In the face of the extinction crisis it is easy to feel helpless, but as a nation the UAE has taken many actions including the establishment of the, Environment Agency Abu Dhabi, the International Fund for the Conservation of Houbara and the Arabian and Scimitar Oryx breeding and release programmes. It is from this same wellspring of care that the creation of the Mohamed bin Zayed Species Conservation Fund was born,” said H.E. Mrs. Al Mubarak.
The engine that provides the MBZ Fund with the resources required to support species conservation is a financial tool known as an “endowment” that is invested in stocks, bonds, currencies, hedge funds and microfinancing schemes. This endowment generates about $1.5m per year – 100 % of which goes directly to support species conservation projects. In the 10 years that the MBZ Fund has been operating, the endowment has increased in value from $27m to $30, while also providing more than $17m to projects worldwide. “While the grants are funded by the endowment, the operational expenses of the MBZ Fund are provided for by an annual grant from the government of Abu Dhabi. Not a single dirham of the endowment goes to fund operations,” said Mrs. Al Mubarak, “this is philanthropy Abu Dhabi style.”
When asked how the public can help the MBZ Fund to prevent the global loss of biodiversity and stop the extinction crisis, H.E. Mrs. Razan Khalifa Al Mubarak suggested a number of opportunities including the simple act of going into nature, teaching children to respect and appreciate nature, participating in environmental clean-up days, and also suggested working with the MBZ Fund to increase the size of its endowment which will enable it to support even more species conservationists into the long-term future. 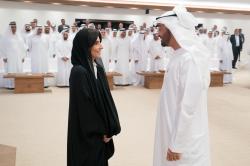